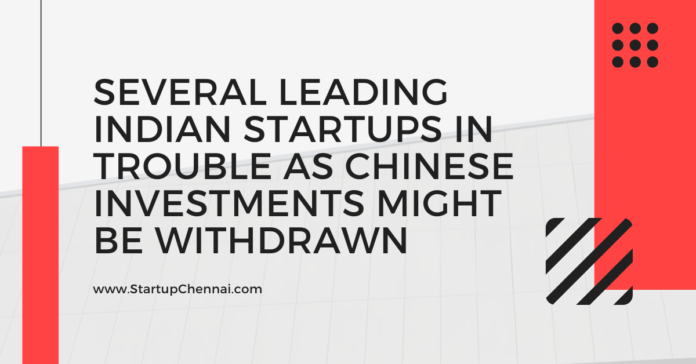 Some of the top Indian startups such as Zomato, BigBasket, Paytm, Udaan, along with many others, have Chinese investors. These Chinese backed companies are probably going to face a crunch in raising their capital, considering the on-going military clashes between the two nations.

All these startups and their entrepreneurs have denied commenting about this situation, but some significant risk capital investors are asking their respective portfolios to branch out their capitalization tables.

Founding partner of 3one4 Capital, Siddarth Pai revealed about how the startups are interested in the quality of the capital that they are receiving rather than the total amount received. Quality over quantity has become the mainstay of investments, he added. 3one4 Capital manages assets worth Rs 800 crore across four funds and does not reckon investors that are Chinese or have Chinese origin, in their list of Limited Partners.

More than $3.9 billion in 2019 have been invested by Chinese investors in Indian startups. They are the biggest supports of India’s expanding digital economy.

One of the Unicorn founders revealed that “the risk is for early and growth-stage companies where these cheques are still an option-value. Businesses that already have investors deeply invested cannot and will not back out at this point.”

Another founder of a startup said that although Chinese investments have slowed down after the Press Note 3 released by government in the month of April, there are other investors from the Middle East, UK, and US that have begun showing interest in making investments.

The Chinese investors have become cautious about the new foreign direct investment policy of India. The policy mandates that any investment made from countries that share borders with India will need approval.

Conclusion:
The concern is that India’s startup ecosystem, which is largely dependent on foreign funding given the on-going lack of home-grown capital, will definitely undergo substantial cash constraints if the Chinese investors walk away.